Heating Ventilation & Air Conditioning (HVAC) systems in large buildings are inherently complex systems and final system efficiency is the result of efficiencies of different components of the system. We take a system approach to designing energy efficient HVAC for buildings and thereby, multiplying the impact of various component level efficiencies.

Oorja has pioneered many cooling technologies in India at a commercial scale. These including technologies like Radiant Cooling, Structure Cooling, Geothermal Cooling, Waste Heat Recovery etc. We design and implement systems in turnkey mode using such technologies to reduce energy consumption for cooling by 30-90%.

Depending on the location and building use, our solutions combine >15 energy efficient cooling technologies like:

Radiant Cooling (and Heating) has been used for centuries to cool the spaces, even before the advent of fans. Radiant Cooling involves using civil elements like floor, ceiling or walls as heat sinks to cool the space. Unlike air-conditioning, it does not use air to cool the space. A network of pipes is embedded in floor or ceiling and cold water is circulated in these pipes. This makes the temperature of the surfaces lower and they absorb the heat from the space. To know more about Oorja’s capabilities in radiant cooling, please click here. 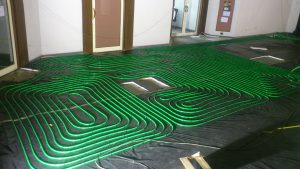 Geothermal Cooling involves using lower temperature of the earth to reject heat. Most air conditioners are air-cooled, i.e., the heat from space is rejected to the outdoor air. However, as the outdoor temperature rises, the performance and capacity of cooling system deteriorates. Many air conditioners do not work if the outdoor temperature exceeds 48 deg C. Since earth’s temperature (below 5m depth) remains more or less constant throughout the year, heat can be rejected to the ground instead of air. This does not allow the equipment capacity and performance to deteriorate, especially in peak summers.

Oorja has executed multiple geothermal projects in India, including the largest geothermal cooling system in India. 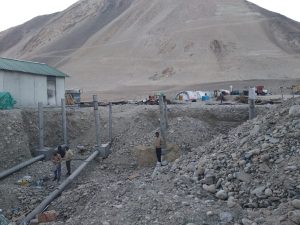 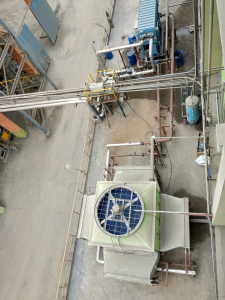 Variable Speed Compressors allow the chillers to operate more efficiently than the constant speed ones. This is done by matching the speed of the compressor to the cooling load. According to the US Environmental Protection Agency (EPA) “Chiller spend most of their operating time at 40 to 70 percent load under conditions that are often considerably different from standard conditions”. A variable speed compressor can reduce the energy consumption in such conditions which will be there throughout the chiller’s operation time either due to changes in the load during a day or due to seasons. The savings due to Variable Speed Compressors is at least 15% as shown in the graph below. But this saving increases when the condenser water temperature is lower and Oorja’s Multi-stage evaporative cooling allows for operation at lower condenser water temperatures, thus enhancing the savings.

Internet of Things (IoT) based Controls

IoT controls allow us to monitor various operational parameters of all installations from a central location and take actions to optimize the operations. Many of these actions are automated. For example, operating the chiller at a higher set point during periods of lower humidity. In addition, logic using AI is also integrated based on the operational data from thousands of data sets to operate the chiller plant in a way site operators cannot operate. 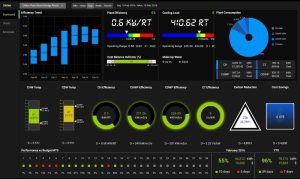 Magnetic Bearing Chillers or Maglev Chillers have oil-free, variable speed compressors. The biggest benefit of these chiller is that magnetic bearings reduce the friction and eliminate the need for oil lubrication. Reduced friction results in lower energy consumption. 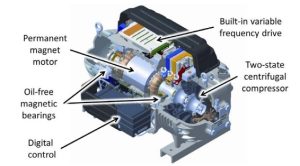 Thermal Energy Storage (TES) allows generation and storage of cold energy during non-peak hours and use them during peak hours. This results savings when there is a difference in the electricity prices during the peak and non-peak hours. It also reduces the connected load and equipment required. Oorja has installed TES in multiple projects for cooling as well as heating spaces.

The graph below shows delivery of same amount of cooling for a building, but using lower connected load and lower cost when using TES.

When we dehumidify air to maintain the required humidity in the space, condensate at low temperature is produce. Almost all installations, drain this condensate and this water is never used. Condensate water has two benefits: 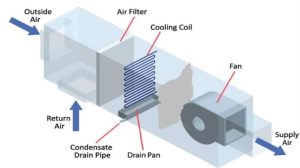 Traditional design for AHU condensate drain that is wasted.

VFDs are devices that control the rotational speed of an electric motor by adjusting the frequency of electrical power supplied to the motor. This is primarily used to control the speed of the pumps and fans in HVAC applications. Cooling loads in buildings vary all the time and ramping up or down of the capacity can be done by changing the air and water flow. A constant speed system results in over-cooling and therefore, wasted energy.

One can see in the graph below how for the same amount of flow (Q2), the a constant speed pump and a VFD controlled pump use different amount of power. There is unnecessary power losses due to throttling of the flow due opening and closing of valves in various areas of a building. Such losses can be avoided by using VFDs. 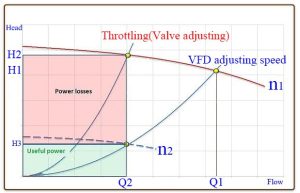 EC Fans consist of a brushless DC motor that is coupled with on-board electronics which controls the speed of the fans rotor. EC fans can be 10-30% more efficient that the traditional induction motors. This is due to the use of permanent magnets in them compared the copper windings in an induction motor. It makes the fan design very compact and is increasingly being used on Air Handling Units (AHUs) for better operational efficiencies. 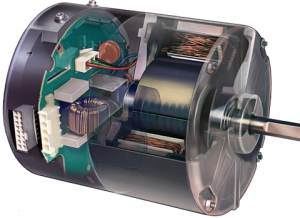 Subcooling is a little understood topic even by experience HVAC professionals. Subcooling is cooling the refrigerant below the condensation temperature. This increases the cooling capacity of the system for the same amount of power used. Oorja’s technicians operate the chillers with the right amount of subcooling to get greater benefit from the same equipment. 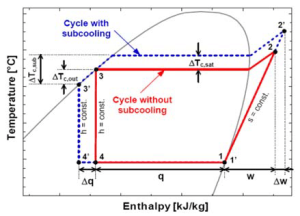 IE5 are the highest efficiency class of motors. Energy losses are reduced by 20% between the classes, which means IE5 motors are 20% more efficient than the current IE4 motors. However, this depends on the capacity of the motor as shown in the graph below. Hence, a careful selection of motor efficiencies is needed depending on the capacity. Many pump suppliers have now started offering IE5 efficiency pumps. 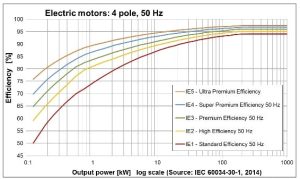 Heat Recovery in Air Handling Units (AHUs) is a way to capture the cooling from the air being exhausted. This reduces the energy required to cool the fresh air. Fresh air load varies from 5-10% of the overall cooling load and hear recovery can reduce the energy consumption for cooling and dehumidifying the fresh air. A typical schematic of an AHU with heat recovery is shown below. 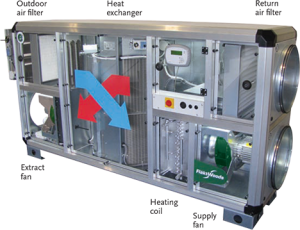 Desuperheater is very useful to generate hot water for free when the chiller is in operation. This is especially useful for hospitals and hotels. It also increases the efficiency of chiller operation.

Many installations of the chillers today choose for air-cooled option due to problem in availability of water. However, with additional treatment of waste water, it can be used for a water cooled chiller. Customers can reap 20-30% energy savings by moving from air cooled to water cooled chillers. 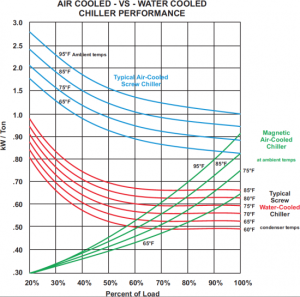